It all started in that rooftop in Hong Kong. I saw the lights of the planes above my head and I was thinking how to get home if one day those devices stopped flying. I liked the idea and started thinking about it. I thought that when I left the city I would go home as I came, with a backpack but, this time, by land. And here I am…

I believe that the happiness of a plan should not be subject to the achievement of the final goal. Happiness is not destiny, it is the way. I say this because this trip will end whenever, ideally in Zaragoza, but if the motivation of it disappears I will not hesitate to finish it, throw myself in one of those black hole-airports, and return home.

At the moment I write from Xian, one of the key stops of the trip and its turning point. This city divides the Chinese route into two very different parts. The first, from Hong Kong to here through Yunnan and Sichuan, more landscaping, harder, more Tibetan, unpaved roads, populations at more than 4,000 meters high and cold. From here the road becomes more historical, more desert, as a silk road, somewhat Muslim, with territorial conflicts and hot.

But as always a picture is worth a thousand words, here there is a map with the route made so far from Hong Kong …

… another of what I have left of China …

… and the entire route in its Chinese part 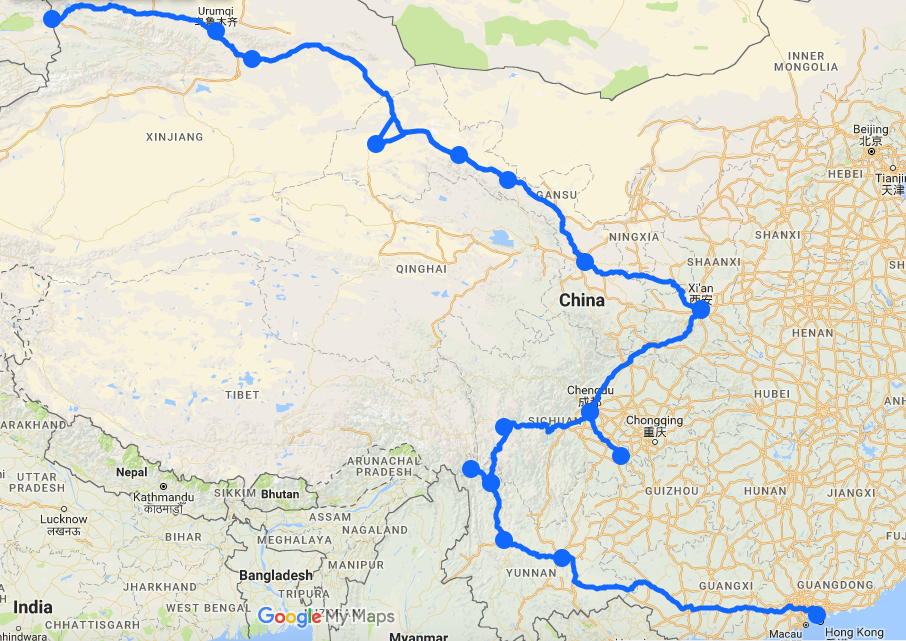 Then, if I still feel strong and the economy respects me, Central Asia will come, a zone of difficult orography and bureaucracy. We will see how I am by then because the mountains are very high and getting some visas is as difficult as climbing one of them.

I finally left Hong Kong in November 2017. Since this route is very complicated to do in winter, I decided to buy a return ticket for April. I smiled as I boarded the Madrid plane while thinking that leaving was to start coming back. I landed in Hong Kong and immediately I got a mixture of sadness and getting tired that disappeared as soon as I remembered that I was only there to visit very dear friends and get a multi-entry visa for China. The visa was much easier to obtain than expected. Meeting my friends was much more difficult and I could not see them all. I apologize for those I could not see. They were days of walks, hugs and dinners, good wishes and someday we will see each other again. This city and its people always be in my heart.

I crossed the border into mainland China in Shenzhen with a lot of noisy children who study in Hong Kong but live on the other side. The borders are usually a serious and grey place, of uniforms and forms, so I loved filling mine among laughter and games. I took it as a good omen.

I had trouble finding the hotel. When I did, I went straight to pick up the train ticket that I had booked online and had dinner near the station. The next day very early in the morning I left for Kunming, the capital of Yunnan. I had visited the city in September 2016 on my way to Dali, further north. This time I made the same route. I stayed three nights in Kunming and visited my friend Chris, whom I met during those months of volunteering in India and of which I have already told you about him. Then I took the train to Dali and I stayed again at the hostel where I spent two weeks while trying to study Mandarin. It is a great place to start the book that I am going to write during this trip. I will tell you about it some day 😉

In Dali I loved seeing again my little young teacher, my dear Susanita, who is an absolute love of sympathy and kindness, who invited me to dinner “because that’s what a teacher does in China with her student” and who was very happy to see me again. And I was even happier to see her again.

And then the unknown began. The short trip to Shangri-la lasted less than five hours. I divide the journeys into short ones (less than five hours) or long (more than five hours). The city is about 3,200 meters high and breathes differently. They changed the name because of film from the 30s that I strongly recommend (Lost Horizons) and thus get more tourists. Marketing Strategy. I liked the town so so. With some pretty temples …

… and some night walks with patriotic films of communist shadow.

I especially liked the temple of 100 chickens, because I love these animals and because I was alone inside. When I was sitting by the candles I could even see a little rat that kept me company while I was inside.

I traveled to the capital of the county, Deqen, for a trip I had always wanted to do. It is a small village lost to 40 or 50 kilometers from the political border of Tibet but that has all its essence. What I like is that you can only reach it after a walk of about five hours. No cars or noise or paved streets. And during the days I was there I had the immense luck of making a group of wonderful friends who spoiled me like never before. In fact, we are still in contact today through a Wechat group. I miss them a lot, especially at meal times, when it was a real show to start our «chopstick-war». I love you a lot, Family. See you soon in Spain 🙂 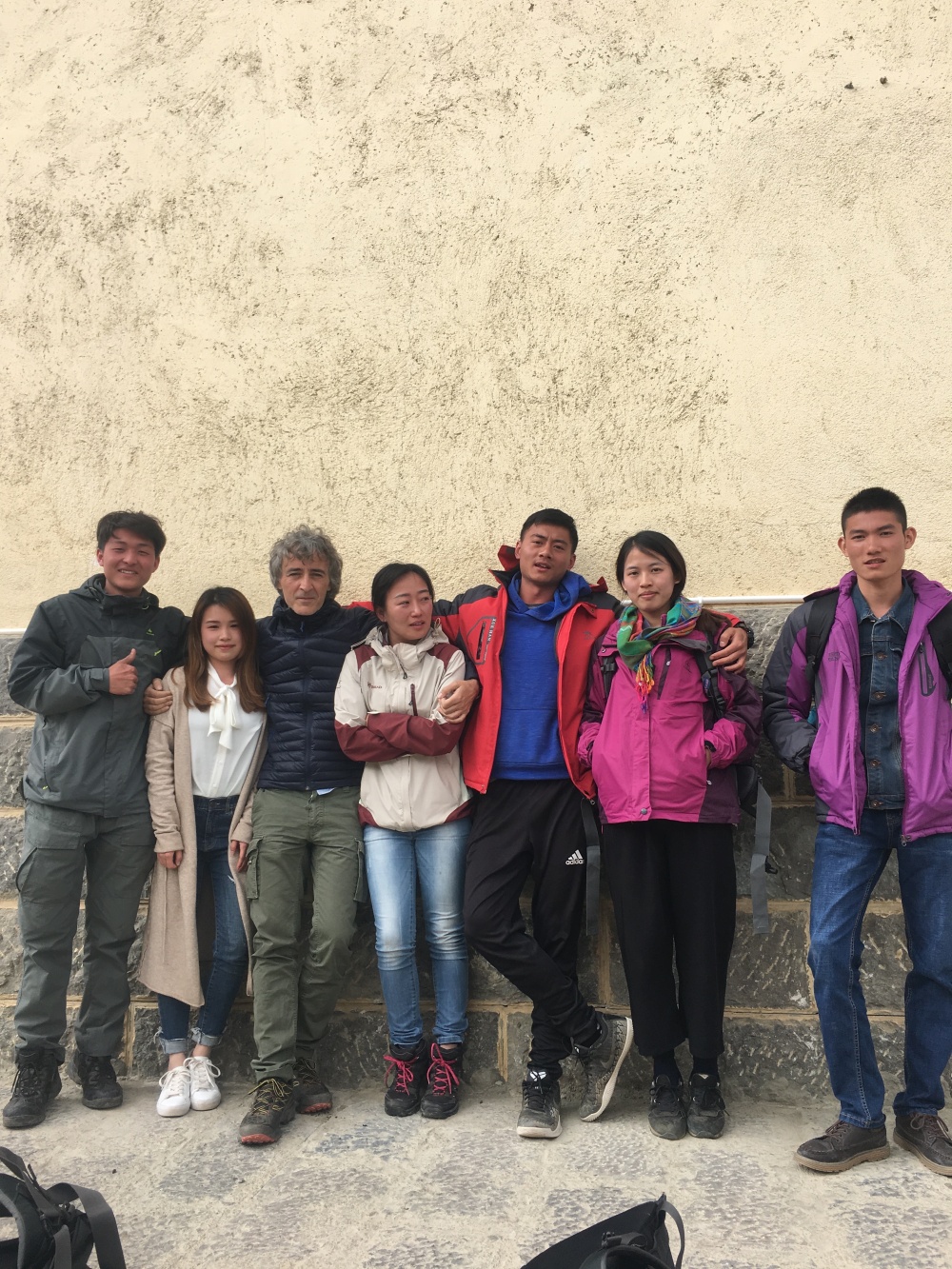 I returned to Shangri-la. We said goodby and I started a nostalgic journey of eight hours by unpaved road to Daocheng, already in Sichuan province. There, in the Yading National Park, I also had the opportunity to walk among the mountains, this time alone. It was fantastic to be up there with no one around, at 4,800 meters of altitude between 6,000 meters mountains, far from everything and with my mind full of past memories and future plans. A great moment..

Long trip to Litang for 6 hours. It is a sacred place. Here the seventh Lama was born. It is located at an altitude of 4,014 meters, 400 more than Lhasa, and it was very difficult for me to sleep at night when the breathing deepens. My nose was a little blocked and I had to breathe through my nose and mouth, which is not very comfortable. However, as I felt pretty fit, during the day I would go up to some nearby hills and sit down to see the little village and eat chocolate and drink tea 🙂

And when I got tired of yak butter, and yak milk tea, and the yaks themselves…

… I took a van and, after a very long twelve-hour trip, I arrived in Chengdu, the capital of Sichuan, with some 14 million souls. There I met Patxi, from Pamplona, and we became very close friends. Thanks to him, I got great news: they could extend my permission of stay in China for another 30 days without having to leave the country and keep my multi-entry visa. I had to stay in the city for nine days but I did not care at all. I took advantage and visited Amy in Luzhou, one of the friends of the Family, who kindly hosted me at her house for three days (it’s the route that goes from Chengdu to the south on the map) She introduced me to many of her friends and also in the wonderful cuisine of Sichuan, one of the most famous (and spicy) in the country. The wait in Chengdu also felt short. I did a customized cooking course in which I was taught to cook my two favorite Chinese dishes. Patxi also took care of me and we had a great time together with lots of funny moments and coffee, which I don’t usually drink, but with him it is impossible not to do so.

And the day came, and they gave me the extension, and I bought the ticket, and I left for Xian. And so I tell you and I hope to do it again in less than a month, when I’ll sadly have to leave China and see if I’m still traveling. We’ll see 😉